Our hotel room was great. We were in room 506 of The Howard hotel. This was a corner room with a view overlooking the Thames river and a great view of the London Eye and Big Ben. If we had been a couple of floors higher, we would have also had a good view of the Tower Bridge, but we could only see parts of it from our room because of the trees. This hotel had been renovated and brought more up-to-date. The room, hotel, and the staff was first rate. The hotel had 10 floors total, the ground floor, and floors 1-9. In the picture below, we were in the corner room on the right side of the picture, 4 floors below the top floor. The Thames river is just below the bottom of the picture, so we were very close to it. This picture was taken during our flight on The London Eye. 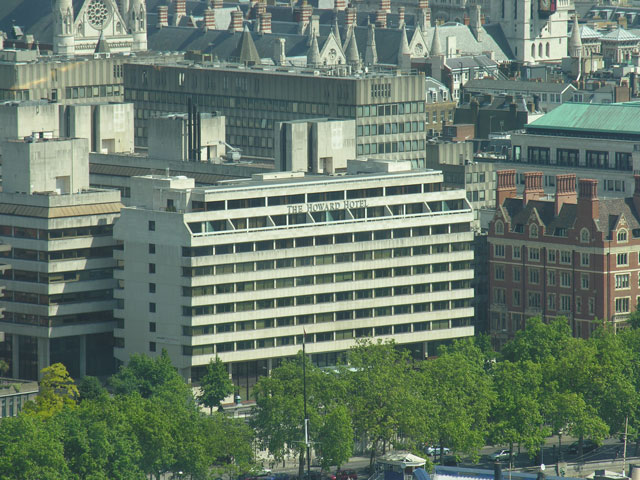 When you first walk in the door of the room, this is the view you have. 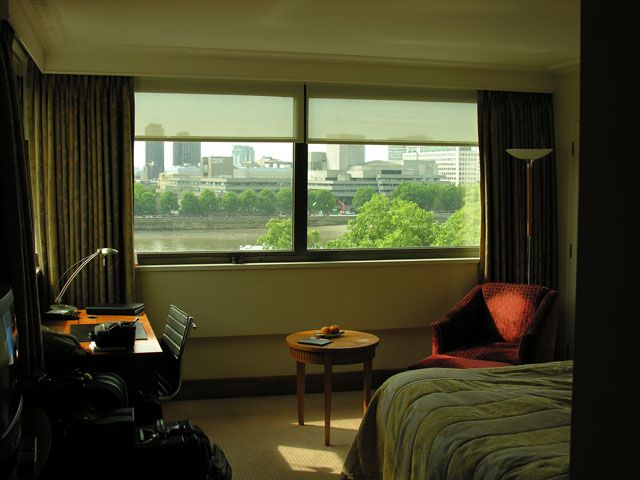 The bathroom ("toilet" in London), is immediately to the right as you walk into the door. The bathroom was different than any other hotel room we've been in. The vanity was pretty standard, as shown below. There is a hair dryer mounted to the left wall at the vanity, and the mount has a plug suitable for a 110 or 240 volt shaver. 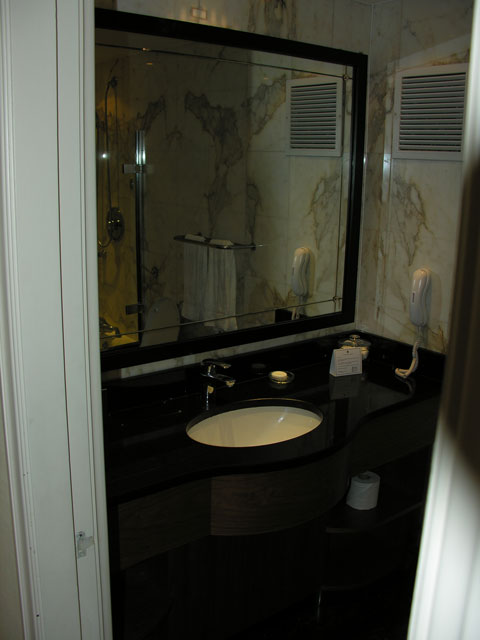 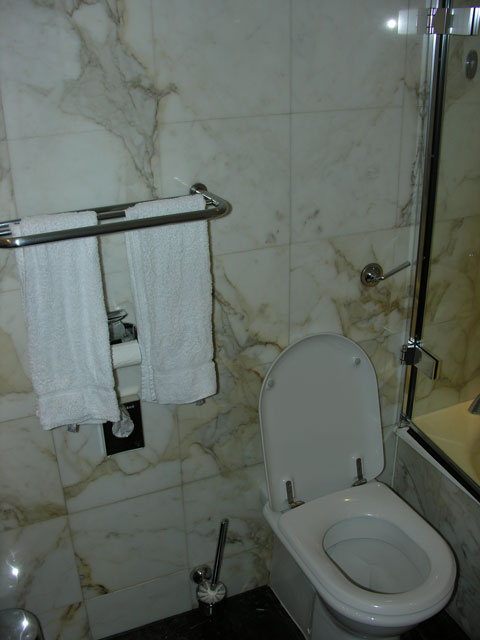 Another unique thing about this bathroom is that the tower bar in the next to the toilet above was heated. It was quite warm to the touch, but not enough to burn you. This would warm up towels nicely, or dry them after you used them. Just to the right of the toilet was the shower. This had to be the most unusual shower I've ever seen. The glass pane shown in the picture below is attached to the wall with hinges. It opens to the left, over top of the toilet. I imagine that this is used to allow easy access to the shower head. The most unusual thing though is that there is no shower curtain. You had to be careful or water from the shower would get onto the floor. This was  not really a problem however, since there was a floor drain on the floor between the toilet and the shower, up next to the wall.

Once back into the main room, you have a great view because of the corner windows. The desk in the corner has a lamp, a phone, and a DSL modem for internet connectivity, along with a couple of power outlets in a flip-up compartment underneath the desk lamp. 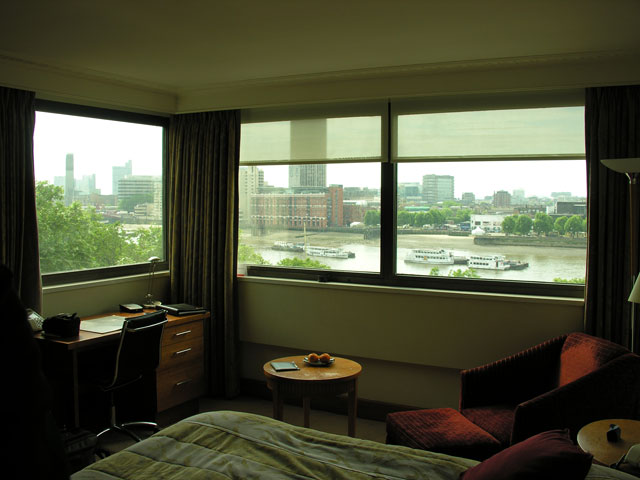 This provided some spectacular views, although the windows were somewhat dirty. There were dirty spots on the outside of the windows, and since they don't open, we couldn't clean them. The only problem with this was when we were taking pictures and had a slight tendency to blur the pictures taken from inside the room. You may be able to notice this in some of the other pictures  taken from the room.

Standing at the window and looking back toward the entry door of the room, you can see the TV and the bar, which includes a LaVazza coffee maker. 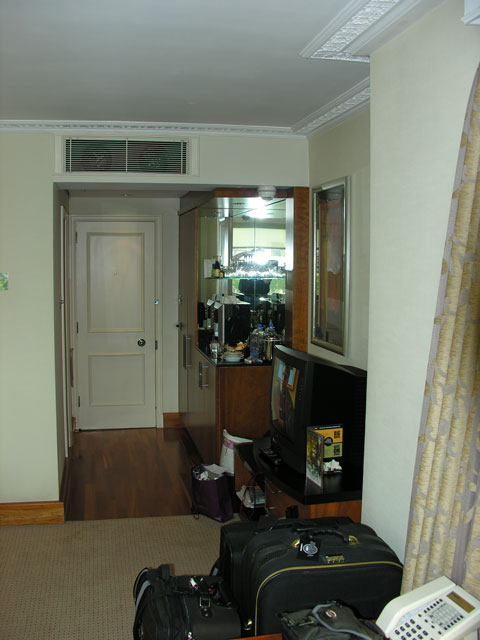 A close-up of the bar area is shown below. 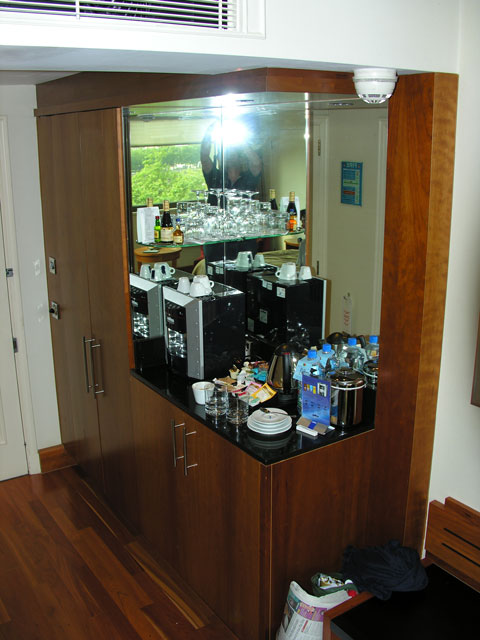 The LaVazza coffee machine is the machine on the left side of the counter top. There was also a teapot which was between the coffee machine and the ice bucket. Interestingly enough, there were no ice machines on the floor. If you wanted ice, you had to call room service and they would bring up another bucket of ice and swap it with your empty one. This was  a little cumbersome, but at least they didn't charge for the service.  The room was accented with wood and chrome throughout. The wardrobe above was made of solid wood, and all handles and accents were chrome. On the left side of the wardrobe near the door are two chrome plates. An enlarged view of them is shown below. 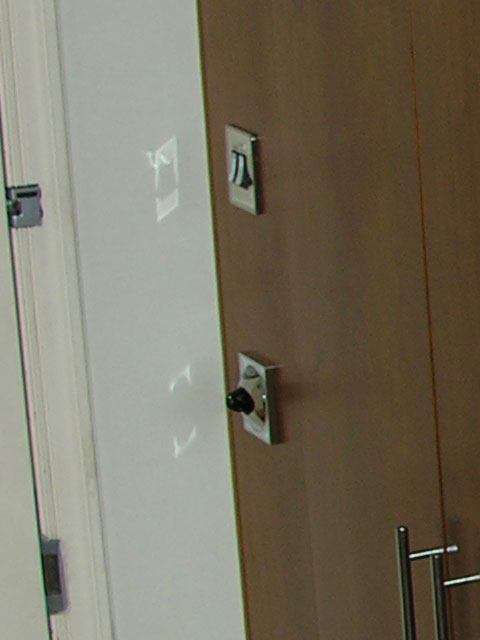 The top plate is for the lights. One of the things that was different in England from the U.S. is the light switches. When in the position shown, they are in the off position, when flipped down, they are in the on position. The plate below is a receptacle for a plastic key that looked similar to our room key. When the key is removed, all of the lights are turned off in the room. 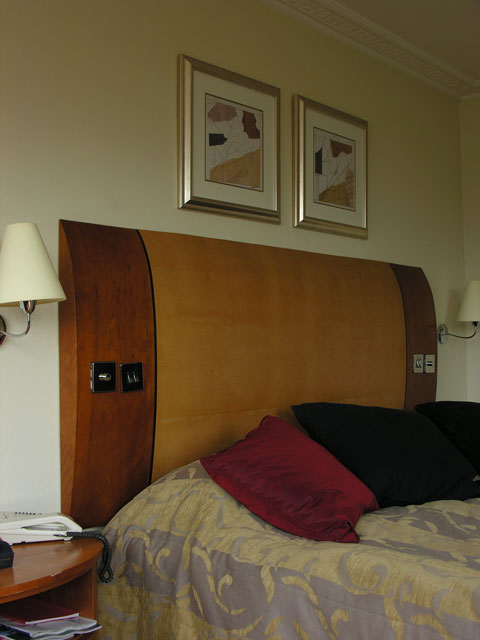 The only thing I didn't like about the room was the bed. It was a king size bed, but the box springs were two single box springs placed side-by-side with a mattress on top of them. The box springs though, weren't the problem. The problem was the mattress. The mattress was very thin and it almost felt like you were sleeping on a sheet of plywood.

In reading the reviews of the hotel before we booked, we were made aware of the high prices in the restaurants in the hotel. They weren't lying... The prices for the food in the restaurants in the hotel was probably fairly standard for a London hotel, but because of the exchange rate, a typical breakfast would have cost us about $36 per person, which was a little high, so we decided that we would eat elsewhere.

We ended up not eating breakfast at all while we were there, not because of the price, but because we were out of the room so early each day in order to get to our activities on time. On average, Christy probably went to bed around 10:30 or so, while I went to bed around midnight so I could get the day's pictures and commentary on the web site. We were waking up between 4:30am and 5:30am each day, so we didn't really feel like getting up an hour or so earlier in order to eat breakfast. Most days, we picked up a pastry and some orange juice or coffee at one of the shops where we were going. Christy made extensive use of the LaVazza coffee machine, and I understand that it makes very good coffee. The machine  has small containers of coffee that are similar to the little plastic butter containers you get in some restaurants in the United States. You just put one of these coffee containers in the machine, and turn it on, and presto, instant  coffee.

One thing interesting to note. It didn't get dark in London until about 10:00pm, shortly before we went to bed, and since the sun came up at around 4:30, it was already light outside when we woke up by 5:00am.

Overall, we liked the room, but I would opt for a river-view room on a higher floor, even if it wasn't a corner room, to get a better view of the Tower Bridge.